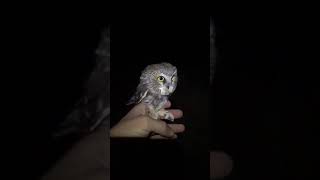 I think I've watched this video a thousand times and I know I'll watch it a thousand more! While owls don't get much cuter than the Northern Saw-Whet, I also love those furry legs, the power in its take off, and the way he comfortably uses Matt's finger as a launching pad. While on the Montana Migration Project, Owl Researcher, Matt Larson, works late and long hours to capture Northern Saw-Whet Owls, bring them into the camper to record data and band them, then quickly let th 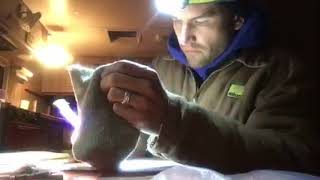 It's the fall kick off of the Montana Migration project so Owl Researcher Matt Larson is back to keeping owl hours! In order to capture, band and record data on this Project, Larson starts his work when the rest of us are getting ready to call it a day...just like the owls do. If you've ever wondered what it's like to be an owl researcher, this video will give you a good, and very quick idea! To date, The Owl Research Institute has captured over 70 Northern Saw-whet Owls. Des